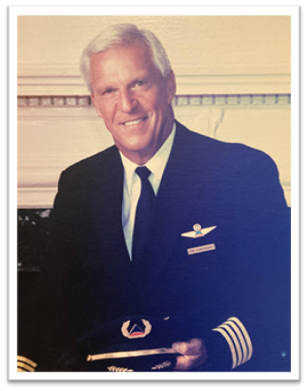 Board Member - Tom Vanderhorst, Retired Navy Officer,  graduated from The Ohio State University in 1965.  He served in the U.S. Navy from 1966-1971 where he graduated from Officer Candidate School and Naval Aviation Pilot Flight School.

He served in U.S. Navy Patrol Squadron ONE as a Pilot, including three combat tours to the Republic of South Vietnam; his awards include (2) Air Medals, (2) Navy Meritorious Unit Commendations.   He worked as a domestic and international Delta Captain 1972-2003 and conducted Civil Reserve Air Fleet operations transporting military personnel and mail into and out of Kuwait City and Bahrain 2002-2003.

He has been a Blue and Gold Officer, United States Naval Academy, Annapolis, MD 2005-2021He serves on the Board of Directors for Solar Ice, Inc, Shenandoah, GA; Hearts of Love, Inc, Texas; Peace of Thread, Inc, Atlanta; the State of Maryland, Charlotte Hall Veterans Retirement Home Board; Georgia State Association of Gifted Education (part of Georgia Department of Education), and on the Board of Operation Not Forgotten.